ABOUT THE EBIKE STORE

The eBike Store is Portland’s first all-electric bike shop. Founded in 2009 by owner Wake Gregg, The eBike Store provides a wide selection of electric bicycles for sale and rent from an array of top brands, in a comfortable and supportive retail environment. Learn more about the staff, history, and mission of the premier electric bike store in Portland below. 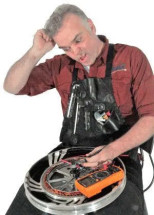 A native of the Seattle area, Wake started his career at the age of 12 as a bike mechanic for a touring group called the Cyclemates. He graduated from the University of Puget Sound in 1994, and later founded a non-profit venture in Walla-Walla, mentoring at-risk youth and teaching them the bicycle mechanic trade.

While a graduate student at George Fox University, Wake took a trip to China and was captivated by the sheer number of people riding electric bicycles. Back in Portland, he launched Portland’s first electric bike company, The eBike Store. The business quickly outgrew its original space and opened a new and larger store in North Portland across from Peninsula Park. Wake currently lives in the Piedmont Neighborhood with his wife and two daughters. 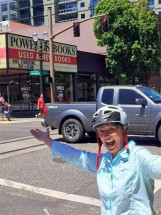 Sarah is a longtime Portlander and former city spokesperson (Mayor’s Office, Parks & Recreation, and Water Bureau) who has taken her knowledge of Portland and passion for bicycling into her role as our eBike tour guide.
Sarah enjoys taking tourists and locals alike on eBike tours because “It is THE best way to really see not only the major attractions, but all the nooks and crannies that make Portland so special.”
When not touring, you’ll find Sarah at her AirBnB – the Woodlawn Neighborhood Guest House, where she has been hosting travelers for 11 years. 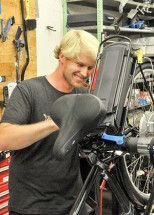 Jeff is a New Orleans native who has been working his Cajun mechanical magic on Portland bicycles for the past four years.

Jeff is a fan of eBikes because “They let me carry heavy things without working hard.”

When not performing tuneups, flat repairs, and conversions, you’ll find Jeff riding his highly customized Raleigh Furleigh all over Portland and frequently all the way from his home in the Lents neighborhood to the Columbia River Gorge and back.

“There are a lot of people who would commute by bike… they just need a little boost.”

We Guarantee Our eBikes

We will match or beat the price from any local competitor on any eBike or accessory we stock.

If you purchase an eBike or accessory from The eBike Store and then find a lower price on that item from a local competitor within 14 days, we will refund you the difference

“The bike tour was the most enjoyable Saturday I’ve had in a foreign city – EVER!”

“A ton of knowledge about the Portland area. Great for those in town visiting or moving to Portland.”

“Sarah is a wellspring of information about a city that she obviously loves. I really enjoyed myself!”

“I am very glad I went on this personal bike tour of the city. Sarah was very knowledgeable and has great tips.”

“My sisters and I had the most fun we’ve had in years on this bike tour. Thank you SO much for helping create wonderful memories during our family reunion!”

“An incredible and fun team building activity for our business. We are all from the Portland area but saw so many things we didn’t know existed or had only heard about. Two thumbs up!”

“It was our first time visiting Portland and it wouldn’t have been the same without Sarah. I would recommend her bike tour to anyone. Great for those in town visiting or moving to Portland.”

“You took the time to let this photographer stop to take the shots she needed to take. Thank you, Sarah. I will do this again for sure, and take my Canadian visitors along for the ride.”